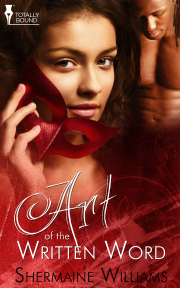 Art of the Written Word PRINT

Yvonne needs the services of an artist and, after reviewing Garvey's work, she finds the perfect candidate. Free spirited and gorgeous, he makes her wish she had met him when she was younger. However, to Garvey, age is nothing but a number.

Excited by the publication of her first novel, Yvonne wants to celebrate by adorning her wall with the cover image. Hiring an artist to complete the project should have been simple enough, but she didn't count on Garvey's arrival.

Despite a manner that belies his young years, Yvonne is sure that her age will preclude her from falling for his charms. Garvey has other ideas and draws her into a world where pleasure is sought from many sources, all in the name of inspiration.

After all, Yvonne did call him her muse… and he takes the role seriously.

His body glistened in the blazing sun, water dripping from his dark hair onto his muscular chest. She followed the route of the droplets as they rolled down his smooth brown skin, catching the light as they navigated his defined abs. Soon, she found her gaze directed at his crotch.

“You should go in, the water’s lovely and warm.”

Looking up at the fine specimen, she felt her face colour with embarrassment, offering a tight smile as he walked past where she sat on the warm sand. Turning to watch him walk up the beach, a shiver of excitement shot up her spine as she saw him turn back to look at her, holding her gaze for several long moments.

She knew it was definitely going to be the holiday of a lifetime.

Yvonne stood at the door of her small home office, considering the young man as he in turn considered the plain, white wall. Tensely awaiting his verdict, her nails skidding across the glossy paint on the doorjamb, she almost felt the need to hold her breath.

Since his arrival, the atmosphere in the house had been different, charged with an energy she wasn’t used to.

He looked much younger than she would have imagined, and the stirring thoughts that flooded her mind left her faintly self-conscious. He couldn’t be more than twenty-five years old.

He was her gift to herself—or rather his services were—after getting her first romance novel, Holiday Pursuits, published. She had sought to hire an artist who would paint the book’s cover as a mural on the wall of her study and, after a little internet research, she’d found Garvey. A man who, as it turned out, was over six feet of wiry muscle with slim dreadlocks hanging uniformly to his shoulder blades, the black interwoven with strands of sun-bleached brown.

Though it was overcast, he had chosen to cover his fit physique with only a T-shirt and long shorts, his dark skin on display beyond the thick khaki cotton. Yet it seemed appropriate, like he had brought the sun with him.

“I could do much more,” he confessed, looking at the cover of the book she had given him. “Don’t mistake me—this a nice picture, still—but I can do better.”

She was almost mesmerised by his deep voice, to the point where she only heard snippets of what he actually said as he spoke of colours, size and originality as an argument against someone else’s work.

His blended accent didn’t know what it wanted to be, seeming to have picked up qualities from a number of different lands. The underlying West Indian lilt was unmistakable, though, reminding her of a childhood of climbing mango trees, tending to chickens and running down the lane to get a pink snow ice from Miss Marcy when her mum gave her a few cents. Her own history was unrecognisable from her clipped English tones, the result of many years of teaching English literature.

Everything he uttered came with a cool confidence, easily convincing her to agree to give him free reign. Simply being held in his gaze made her very aware of her own body, every slight feeling magnified as if she was being studied. “What do you have in mind?” she asked, overcoming her sudden shyness enough to advance into the room, relinquishing the support offered by the doorjamb.

Her loose muslin trousers, designed for comfort, seemed to become tighter with every step she took, clinging to her body as if they were shrinking. Heading for her desk, aligned with the wall across from where Garvey stood, every step seemed like a loud thud when her bare feet were in reality silent against the wood.

Simply being close to the familiar spot gave her comfort, lessening the risk of her collapsing on legs that had turned to jelly, though her temperature remained high. Even at a distance from him, she still found that his height forced her to angle her face upwards to look him in the eyes.

“Something original, that won’t age—this image gon’ look old quick. Maybe something personal to you.”

Yvonne’s brow furrowed, the nape of her neck prickling as she predicted the direction the conversation would take.

Turning to face her fully, Garvey raised the copy of her book. “I can borrow dis?”

Yvonne nodded, hiding the nerves she felt at the prospect of him judging her words.

“If you have any memorable experiences, I can recreate them in picture form.”

“You know, any special occasions between you and your partner.” He raised an eyebrow questioningly. “Don’t worry, I will keep your business private.”

The warmth of faint embarrassment quickly spread up her chest and neck to reach her face. Does he actually expect me to regale him with tales from my sex life? “No, nothing like that.”

There was something knowing about his easy smile, his high cheeks lifting further and accentuating the flash in his dark eyes. “That’s all right, I can still give you a nice result.”

Yvonne felt her body relax, leaning against the rear of her swivel chair, filled with relief at his acceptance of the commission. Impressed with every one of the paintings displayed on his website, she had set her heart upon him because he stood out from the rest. She would have been disappointed if she had been forced to choose someone else because he didn’t want to do it.

Relief turned into a faint empty sensation as a sense of finality marred the meeting.

“Garvey, can I offer you a drink?”

Share what you thought about Art of the Written Word PRINT and earn reward points.