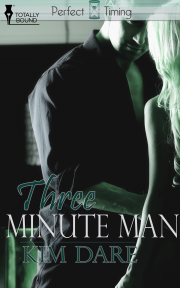 Three minutes doesn't give Ian much time to prove he's the dominant that Susan had given up on ever finding, but it's amazing what the right man can do in three minutes!

Ian had plans for the submissive he'd seen playing casual games with other dominant men in the local leather bars, but she disappeared off the kinky scene before he had a chance to claim her. When he finds her working in a speed dating club, he's determined not to let her slip through his fingers again.

Susan made a conscious decision to give up on the lifestyle. She's not going to change her mind just because some dominant strolls into her life and starts snapping his fingers. The fact that Ian calls to the very part of her that she's been trying to repress for the last eighteen months isn't important. She's not going back on her decision.

Unfortunately for Susan, she's never been able to resist a bet - not when there's more than money at stake.

Reader Advisory: The stories in this collection are linked solely by theme. Each story can be read on it's own and the stories can be read in any order.

“If you’re talking about another damn car rather than a woman, I’m officially disowning you.”

Ian Georgeson stood stock still on the edge of the crowded car park, not paying the least attention to his younger brother’s threats. The view through the window into the club held him completely transfixed. The rows of shiny sports cars behind him suddenly became far less interesting than they had been a moment before.

“Ian, you listening or what...?” Billy trailed off.

Ian didn’t look around. He was sure his brother had caught sight of the same woman he was admiring through the glass.

“The important word in that sentence is yet,” Ian told him. He could so easily slip an imaginary collar around her neck and make the picture she presented entirely perfect. She smiled at someone just out of his sight.

A shot of jealousy raced through him at the simple fact she should smile that way at anyone but him. Ian raised an eyebrow at himself. It had been a long time since any woman had inspired that sort of instantly possessive reaction in him. In fact, it had been almost exactly eighteen months—which was precisely the last time he saw a submissive who looked damn near identical to this woman, in a kink club on the other side of town.

Billy said something off to his left.

“I said,” Billy repeated with a long suffering sigh. “No, please don’t worry about me. Of course I don’t mind you dropping your younger brother to chase after some waitress...etc, etc.”

Billy shouted after him, something about which pub they were supposed to be meeting their friends and watching the match in. Ian couldn’t care less about rugby right then. He was already pushing open the door and walking into the club.

The woman he’d seen through the window stood by the bar on the other side of the room. As Ian strode across to her, he took the opportunity to study her more closely. She was tall—tall enough that he wouldn’t get a crick in his neck every time he kissed her. That was rare enough for a man of his height to find in a lover. It also matched with his memory of the sub he’d seen playing on a St. Andrew’s cross all those months ago.

She turned and he caught a glimpse of her face.

He could always tell. He didn’t know if it was something in the eyes, or the expression, but Ian had proved it to himself time and time again over the years—he could always spot a natural submissive. Even if he wasn’t damn near sure she was the woman he’d spotted in the leather bar all those months ago, he wouldn’t have hesitated to mark the woman standing by the bar down as a true sub.

Closer to her, he turned his attention to checking for any sign of ownership. There wasn’t a single piece of jewellery visible on her body. No pretty gold necklace that could act as a subtle collar, no ring, no bracelet, not even an earring in sight.

Long blond hair fell in loose waves over her shoulders, without so much as a hair clip to decorate it. The little, black, figure hugging dress was complimented by nothing more than simple black stilettos. The outfit was so simple, it was tantalisingly easy to imagine that she’d considered more intimate items of clothing just as unnecessary. Ian smiled to himself, wondering if he would have the chance to find out at some point.

“Perfect balance!” she declared as he reached her side. She lifted a folder and placed a mock kiss against the cover.

The younger waitress on the other side of the bar giggled.

“Finally! Thank you, Lord! They’ve finally coaxed enough women through the door. For once I won’t have to sit through a dozen different versions of...” Seeming to sense his presence, she looked over her shoulder. “Can I help you, sir?”

An experienced submissive then—she knew what that word could mean in the right context. It must be a special brand of torture for a woman who had offered that token of respect to someone who deserved it, to have to apply it to every idiot who walked through the door. The last of his doubts vanished. So this was where that sub he’d had his eye on had disappeared to...

Three Minute Man by Kim Dare possesses the trademark domination and submission that Kim Dare is known for, along with the heart and soul that come with her books and much more that kept drawing me...

Share what you thought about Three Minute Man and earn reward points.