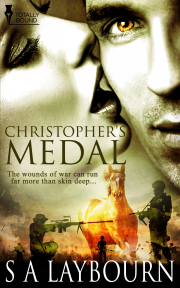 By S A Laybourn

The wounds of war can run far more than skin deep.

Grace Webb trains racehorses for a living. It's a career she's happy to focus on when her fiancé, Christopher Beaumont, is deployed to Afghanistan. At a time when racing yards are losing horses because of the bad economy, a promising horse like Allonby could be the salvation of her father's yard. Grace welcomes the chance to focus on Allonby in attempt to stop fretting about Christopher's growing despondency and the frustration of lousy internet connections.

When Christopher comes home with horrific leg wounds and Post Traumatic Stress Disorder, Grace is determined to help him heal. While she fights Christopher's nightmares, depression and rage, she also faces a battle to save Allonby's career before it's had a chance to blossom.

Christopher, feeling that he's giving Grace more grief than love, leaves her. Grace couldn't heal Christopher, but she can help Allonby and keep her father's yard running. When Christopher returns, seeking forgiveness and a second chance, Grace gives him that chance. This time she won't let Christopher surrender to his demons. On the eve of the biggest race of Allonby's career, Grace faces down her worse nightmare—saving Christopher from himself.

Grace glanced up from the hoof she was examining. “Who’s got an arse like a fry cook?”

She straightened up and looked at Harry. He had just finished putting the shark’s tooth quarter-marks on Allonby’s hindquarters and had stepped back to admire his handiwork. Considering that he had probably spent at least three hours in the pub after morning stables, he looked relatively sober. The quarter-marks were perfect and the colt’s coat gleamed like varnished oak, even in the gloom of the saddling enclosure. Grace had learned that Harry could be as pissed as a rat and still turn a horse out to a very high standard.

She smothered a yawn and wished the colt’s owner wasn’t going to be attending. She was glad that it was the General rather than one of the syndicates. He and his wife were much easier to deal with than a group of inebriated bankers or estate agents.

“He does look good, doesn’t he?” A racehorse trainer had once said that a good horse should have ‘the look of eagles’. Grace was pleased to see that Allonby had that look when he lifted his head and surveyed the activity on the lawn beyond the enclosure. His ears were pricked and he stared sharply at something that no human could see. That serene and arrogant gaze gave her goose pimples. She just knew she was looking at the winner of the night’s five-furlong sprint.

Grace patted Allonby’s neck and glanced at her watch. “The General should be here soon.”

The paddock quickly filled up with other horses, trainers, grooms and owners, standing in knots on the lawn. Women dressed in summer finery enjoyed the soft warmth of the July evening as they strolled across the lawn. Grace envied them their Pimms and gin and tonics as she took a sip of lukewarm water from her plastic bottle while she searched the crowd for Allonby’s owner. The jockeys were already making their way out of the weighing room and she spotted Billy Riley in the General’s gray and claret colors. Allonby’s owner, guest in tow, also strode across the grass toward her.

Grace allowed herself a relieved smile when Harry handed her the saddle, grateful that the General was one of those owners who stayed out of the saddling enclosure. She hated the owners who lingered in the box, pestering her with questions and talking as if they knew something. Grace tightened the girth and patted the colt on the rump when Harry led him toward the paddock. Allonby walked ‘like a hooker’—another pearl of wisdom. He had a loose, easy swinging stride and, although he was busy looking around, the lead rein remained relaxed and the colt’s ears twitched while he listened to Harry talking calming nonsense. Her father had put a lot of work into the horse and Grace could see why. People stopped to watch him when he ambled past, then look at their race-cards. She wondered what odds he was getting down in the betting ring.

“He looks good, Miss Webb,” Billy observed as they headed toward the owner.

“He does. If you behave yourself, we might win this one.”

The jockey laughed. “Don’t you worry. I’ll save the bad stuff for after—fancy joining me?”

“No thanks. You know me, no stamina these days. Plus, Dad’s up at York tonight so I’m in charge tomorrow.”

“You always have an excuse, Boss.”

“With good reason. Remember the last time we went out? I didn’t stop vomiting for days. You have lousy taste in restaurants, Billy.”

Grace smiled when she approached the General. He was easy to spot in a crowd, with thick white hair and an alarmingly red complexion.

“Hello, Grace.” He took her hand and kissed her cheek. “It’s lovely to see you.”

“I brought a guest, I hope you don’t mind. Mary couldn’t make it. She had a bridge tournament or something like that. Anyway, this is Christopher Beaumont. I served with his father in the army. His family and mine have been friends for years.”

Grace became aware of his companion for the first time, a tall, lanky man with short, brown tousled hair and almond-shaped eyes the color of strong tea. “It’s nice to meet you,” she murmured as he shook her hand.

“All good things, I hope.” She offered him a smile and took in the neatly pressed chinos and the blue and white striped shirt. His eyes held her, dark and rich with secrets.

My God, he’s beautiful. How am I supposed to concentrate on a race with this distraction?

His cologne smelt of juniper and lemons and Grace felt like an idiot while she fumbled to retrieve her Assistant Trainer frame of mind. Billy stood at her elbow awaiting her instructions. She turned to him and hoped that no one saw him wink. “Keep him tucked in behind the Godolphin horse,” she told him while they walked across the paddock. “That’s the one you have to watch, but I don’t think I need to tell you that. If there’s still plenty in Allonby at two furlongs out, move him out and let him run. He’s as fit as he’s ever been.”

Harry turned Allonby in and Grace gave Billy a leg up. She caught a glimpse of the favorite who jigged about, coat darkened by sweat. “It seems,” she said to him, “that the Godolphin horse is a bit worked up. That’s no bad thing.”

Billy grinned. “Don’t worry, Boss. I’m on it. Just put your eyes back in your head and do your be-nice-to-the-owner thing. I don’t think you’ll find it hard tonight, somehow.”

“Am I that obvious?”

“Nah. I just know you, that’s all.” He gathered up the reins and patted the colt on the neck. “See you in the winner’s enclosure.”

Grace stood on the edge of the grass and watched them walk toward the course. Allonby was still calm, still taking everything in. Even in the warmth of the evening, he hadn’t broken into a sweat. He swished his black tail and followed the other horses.

“So, Grace, what do you really think?”

She was unaware that the General had come to stand beside her. “I think he could win. He worked really well last week and ate up afterwards. That’s always a good sign.”

“What does that mean?” Christopher asked. “That he ‘ate up’? Is that important?”

Grace looked at him and felt absurdly pleased that he seemed interested in what she had to say. “When a horse does hard work it takes a lot out of them. Some horses can be a bit picky and they won’t eat afterwards. It’s as if they get too wound up and they won’t settle. Allonby didn’t let his hard work bother him. He ate everything he was given. He’s like that. He’s very laid back, except where it matters.”

Someone strolled past with a huge plastic cup full of Pimms and Grace wanted one. She also wanted a cigarette but resigned herself to waiting until after the race. “We’d better find a place in the stands,” she said absently.

A hard-working, down-to-earth heroine, a gallant and deeply wounded hero, and a magnificent thoroughbred training up for the race of his life—I’ve loved horse stories since I was a little girl, and...

Reviewed by Hearts on Fire

It has been a long time since I have really enjoyed a m/f romance.  What made me decide to give this one a try?  I loved the cover, know the author to be a successful m/m author, love to read...

Share what you thought about Christopher's Medal and earn reward points.

You live in Wiltshire and love it so what is the appeal of having your home there?

Wiltshire was a happy accident. It just happened to be the place where my husband managed to find a job. We live in a village not far from Marlborough and the downs are beautiful. We live in a small village which is best known, probably, for being the UK base of the 101st Airborne - Easy Company, before they were shipped out to Normandy. There's history around every corner and a drive down one of the country lanes around here helps me if I'm suffering from writer's block or plain old ennui.