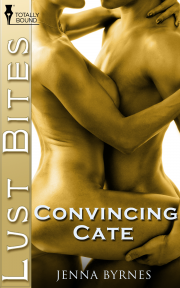 Vince Mason is sure the perfect woman doesn't exist. When he meets elusive Cate Reynolds and finds she's nearly as close to perfect as he can imagine, he doesn't want her to slip away.

Cate is attracted to Vince, but she sees one major problem—he's almost ten years younger, an age span she refuses to live with.

It's going to take one carefully crafted plan, a few well-meaning relatives, and maybe even a shot from Cupid's arrow before Vince is through convincing Cate.

Publisher's note: This book has been released previously. It has been revised and re-edited for release with Totally Bound Publishing

Reader Advisory: This book was previously released at Totally Bound Publishing by the author under a different pen-name

She was pretty enough to be a high-priced call girl, but he didn’t think she was. Vince Mason stood back and surreptitiously watched the woman seated at table twenty-nine in the restaurant where he waited tables. She was a beauty, with deep, chocolate-brown eyes and full, red lips. Stylish, short brown hair framed her face. He usually preferred longer hair on a woman, but in this case, the style suited her. There wasn’t one thing he’d change about this woman. Catherine Reynolds.

He knew her name because table twenty-nine was his table, and she entertained guests at the restaurant at least twice a week. That’s what she appeared to be doing, anyway. She was with different people every night. Usually men, occasionally women, but Miss Reynolds always paid the ticket with her credit card.

Vince called her Miss Reynolds out of respect, and hoped one day she’d say, ‘Call me Catherine’. She hadn’t yet, but he still hoped.

Another waiter brushed past him from the kitchen and mumbled, “Watch out, man!”

“Sorry.” Vince stepped out of the way, catching a glimpse of his reflection in the swinging metal door. Unkempt, curly brown hair was the first thing he spotted. Probably the first thing anyone spotted when they first saw him. He always thought the hair made him look about fifteen, and apparently others agreed. He was often asked to show identification when he bought beer or nudie magazines, even now at the age of twenty-three.

He’d tried a super-short razor haircut once, but friends agreed it wasn’t his best look. He was blessed, or cursed, with a head full of curls. Vince’s mother called him cute. He wasn’t sure about that, but he knew starting around his junior year in high school, and all through college, he’d had no trouble attracting girls. Now graduated, he worked at the restaurant full-time, while on the side, perfecting his true love, painting.

He had plenty of dates. Women seemed to love a starving artist and many offered to pose nude while he painted them. He hated to tell them still life wasn’t his thing. Vince greatly preferred landscapes, and his favourite subjects were beaches and lighthouses. But the ‘Thomas Kincaid’ route didn’t get him laid nearly as often as the willing, young models did, so he at least attempted still life on a regular basis.

Another glance at Catherine Reynolds had his cock tenting his khakis, and he tried to think about anything to make the bulge go away. His thoughts kept returning to her and he glanced over, noticing her proper business jacket and skirt.

In his fantasy, they were alone in the restaurant. They both knew what they wanted and weren’t going to be shy about getting it. She watched his face while peeling off her jacket, revealing a lacy chemise underneath. Vince eyed her hungrily. Dropping his gaze to her full breasts, he reached out and trailed a thumb over one nipple. It poked out seductively through the silken blouse. He imagined ripping the soft white fabric from her body and burying his face between those two luscious mounds of flesh. When he’d had his fill, nipping and sucking each nipple to firmness, he’d lower her skirt and the tiny thong underneath. She’d lie back on the table and squirm with pleasure as his mouth and tongue explored every inch of the soft flesh between her legs.

Vince groaned. The bulge in his pants throbbed, and his daydream didn’t help. She was damn gorgeous, and deep down he knew that being with her was an impossible fantasy. Catherine was perfection, grace and style like he’d never seen before. For a brief instant, Vince wished she was a call girl, because then, once they’d agreed on the price, she’d be his, for a night, anyway. But he didn’t really want that. He simply wanted her.

Jenna thinks everyone deserves a happy ending, and loves to provide as many of those as possible to her gay, lesbian and hetero characters. Her favourite quote, from a pro-gay billboard, is "Be careful who you hate. It may be someone you love."

5 out of 5! Convincing Cate is a charming read! I couldn't stop smiling. Ms Byrnes will make you want much more of these characters. For a read that is fun, steamy, and realistic, pick up Convincing...

To be a short story, the author managed to fit as much in this story as a full length novel. I could not stop reading it until it was over... then I hated for it to end! The sex was not only really...

Share what you thought about Convincing Cate and earn reward points.