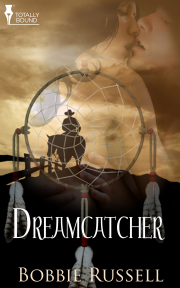 Legend states that hanging a Dreamcatcher over your bed will catch the bad dreams and only allow the good ones to flow through to the dreamer. Willow has been told “if you believe, then it will be so”, but her nightmares about the events causing her amnesia still haunt her and while she knows she doesn't belong with the Blackfoot tribe, it is the only shelter she has…

…until Garrison York appears. Montana rancher and blood brother to the Chief's son, he is given charge of helping Willow discover her past. But the instant attraction between them makes him want to concentrate only on current pleasure. He slowly leads her to succumb to the passion they feel…

Willow’s eyes fluttered closed. Her skin soaked in the feel of his lips as they left a trail of fire down her throat and across one shoulder. He alternately nipped her skin, and then licked it, sending hot sensations throughout her body. As her fingers curled in his hair, she tilted her head back, silently begging him not to stop.

Wave upon wave of heat coursed through her veins, making her body flush with desire. Her womanhood throbbed with some unknown longing and her aching nipples peaked hard. She cried out as Garrison’s hot mouth covered one breast, sucking the nipple through her chemise. The sensations his tongue created were too much and she clung tightly to his broad shoulders, least she collapse from light-headedness.

He had turned her body to liquid, and she allowed herself to flow with the current, unmindful of any obstacles that might be in the way. Garrison would take care of her. She admitted her total surrender to his will. Wanting the ache to stop, yet not wanting it to, she begged him for that which she didn’t understand but inherently knew he could give her.

“Please, Garrison, I ache so. Can you not appease me?”

Her whispered plea rang like a pistol shot in Garrison’s brain. It seemed he had waited a lifetime for this moment. She clung to his neck as he picked her up, leaving the candy-stripe dress in a puddle on the floor. His eyes locked with hers as he carried her to the bed and gently laid her down.

His eyes followed his hands as they moved down her thinly clad body to her slippers. Slipping off one, then the other, he kissed the soles of her feet, causing her toes to curl. When she tried to wiggle out of his grasp, he towered above her, silencing her with a look.

He stood in awe of the goddess lying there; her chemise rucked up her thighs, exposing incredibly long legs encased in silk stockings, held up with rose embroidered garters. Her hips flared gracefully and tapered in to a tiny waist. As his eyes travelled upward, they took in full, firm breasts, moving in an erratic pattern as her breathing shuttered under his observations.

The thin material of the chemise did nothing to conceal luscious breasts that he longed to taste again. His finger traced the edge of lace but impatience took over and with a jerk, he had the chemise over her head and tossed aside. Huge brown eyes stared into his as she nervously chewed her lower lip.

“You’re beautiful.” His voice was thick with emotion and though he knew he should go slowly as not to scare her, he couldn’t. He bent over her and she closed her eyes and licked her lips in anticipation of his kiss.

He stretched out over her, nudging her legs apart with his knee. His cock throbbed harder as he rubbed against her mound. He could feel her heat through the cloth that separated them.

“Do you feel what you do to me—how you make me throb.”

Her eyes flew open and locked with his. He refused to release them as he rocked his hips forward and back. God, he didn’t think he could wait to have her. Still holding her wrists above her head, he bent to kiss her.

This time he wasn’t tender. Pent up needs forced their way to the surface, and it took an extreme amount of effort for Garrison not to ravish her then and there.

Reviewed by Romance Reader at Heart

I couldn't put DREAMCATCHER down. Bobbie Russell tells a riveting story that is not only exciting, but also very sexy! If you want a little spice in your western romance, I would definitely recommend...

Share what you thought about Dreamcatcher and earn reward points.