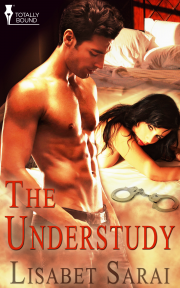 “It’s him!” Adele tugged at my shirt, almost hard enough to tear it. “Look, Sarah!” She pointed to the shiny black Lincoln cruising around the corner. “I still can’t believe it! We’re really going to have a chance to work with Geoffrey Hart!” The wooden porch shook as my friend literally jumped up and down with excitement. Adele’s temperament matched her fiery hair.

Of course my own heart beat faster than normal as the town car approached the inn at a sedate pace. Geoffrey Hart was a legend in American theatre. Since his first appearance off-Broadway ten years earlier, he had won every award in the world of drama. He’d played every prestigious role from Oedipus to Willy Loman. One summer in Central Park I’d seen him as both Hamlet and King Lear. He was astonishing, equally convincing as the callow, indecisive university student and the bitter, world-weary old man. His magical voice, full of nuance and music, reached the back row without amplification. His body language was eloquent with emotion. In both plays, he’d made me cry. His performances were an inspiration, one of the things that finally made me settle on drama—much to my parents’ chagrin.

I’d been thrilled when the Berk Hills Playhouse offered me a place for the summer. I never in a million years expected that I’d meet the man who had been such a role model.

But why on earth was he coming here, to a little summer stock theatre in the rural hills of western Massachusetts? The last news I saw, he was lead actor and part owner of the Gotham Repertory Company. What could possibly have induced him to abandon the city for the sticks?

“I heard that he broke up with Anne Merrill,” said Adele, sotto voce, as if she’d read my mind. “She dumped him. He’s come out here to the country to lick his wounds.”

“What? Who told you that?” I recalled the actor’s handsome face and imposing presence. It was hard to believe someone would dump him—he seemed like the type to do the dumping.

“I can’t reveal my sources.” Adele’s eyes sparkled with mischief. “But the word is that his heart is broken.”

“Oh come on!” I just couldn’t imagine someone like Hart moping about a woman. “Seriously?”

“I wouldn’t lie to you, would I?” She put her arm around my shoulders and gave me a quick hug. “And that’s not all. There are rumours about their relationship—that it was, well, kinky, if you know what I mean. According to the grapevine, she wasn’t just his girlfriend. She was also his slave.”

“Please! You shouldn’t believe every bit of gossip you hear.”

The town car slid to a silent stop in front of the steps. The uniformed driver opened the back door, then stood back to let his passenger alight. For a long moment nothing happened—like the suspense before the curtain rises. I realised I was holding my breath.

A pair of long legs clad in black emerged from the shadowy interior. A lean torso followed, wearing a white shirt open at the neck under a black jacket. Finally, I could see his face.

I really liked The Understudy by Lisabet Sarai. Once again she created an engaging world for her characters to live. Geoffrey and Sarah have a lot of sexual tension between t...

Share what you thought about The Understudy and earn reward points.