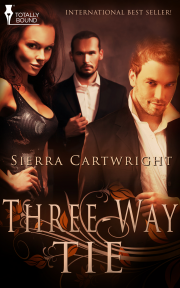 Lindsey wins a weekend with a renowned Dom, and when she arrives, she is stunned to discover there are two men to tie her up and give her the experience of a lifetime.

Two Doms? Lindsey has no idea what to do with one renowned, unyielding, strict dominant, but when she wins a weekend with Master Rafael, she's shocked to learn he's invited Master Eric to join him. One sexy Dom is beyond her experience, but two gorgeous hunks focussed entirely on her…?

In one unbelievable weekend, they take her to the edge of her limits, testing her endurance in a way only two skilled men working together can.

Reader Advisory: This story has been previously released as part of the Subspace anthology by Total-E-Bound

"Is that a problem?" Master Rafael asked, arching an expressive brow.

Lindsey Nolan stood on the porch of the magnificent Rocky Mountain home, looking up at the tall Dom. The hint of a Spanish accent, sexy and compelling, laced his voice, sending a shiver of anticipation through her.

He stood next to another man whom he had introduced as Master Eric. While Master Eric was slightly shorter than Master Rafael, both men were over six feet tall. Both had broad shoulders, narrow hips, powerful and oh-so-sexy thighs.

While Master Rafael was dark, with rakishly long hair and brown eyes she could drown in, Master Eric had sun-kissed blond hair that he wore short, cropped. His expressive blue eyes were warm and welcoming.

Could the two men be more different?

Intuitively Lindsey wanted to be dominated by Master Rafael, but she wanted to be held and comforted—perhaps made love to—by Master Eric.

"A problem?" she repeated. "No. I just have no idea what to do with two Doms."

"You’ll be told what to do," Master Rafael explained. "You’re just expected to obey."

She sucked in a breath.

For a moment she didn’t move. There was something overwhelming about standing here, eight hundred miles from her small- town central Texas home that made her forget everything she knew about decorum. From the moment she’d asked her cousin to take her shifts at the family’s diner and packed her bag, nothing had been the same.

Master Rafael silently regarded her. He’d told her on the telephone she wouldn’t be pushed into anything. The choices, all along, would be hers.

Even though her heart thundered, a few moments later she entered the foyer, dragging her small piece of luggage.

The house was constructed from warm-toned wooden beams. The entrance floor was slate and a Native American rug stretched across its length. This private place, on acres of land, was so different from her humble reality.

Again she wondered what she’d got herself into by travelling to Master Rafael’s home.

He reached above her head and flicked the door closed, sealing out the cool mountain air.

"We’ll talk in the great room," Master Rafael said. "I have your signed copy of the rules."

What a wonderful book to kick off my 2012 reviews....A stunning mix of word construction that left me in awe of the author's talent...It's exceptional.

Share what you thought about Three-way Tie and earn reward points.