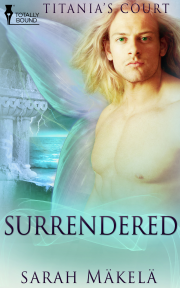 A mercenary who skirts light and dark must protect a reclusive Seelie noblewoman, but when they discover a common link, they must surrender…

Niamh McNamara has always been a little different from the rest of the Seelie Court. Their natural mirth and playfulness is something she has to force, so she won't stand out much during the midsummer's festivities. That becomes nearly impossible when an attempt is made on her life by a violent masked fae. Content with seclusion, she's unhappy when the queen requests her back at court to meet her new bodyguard.

Doyle Kearney is mercenary who skirts the light and dark courts. Some think he's Unseelie, while others are sure he's Seelie. When Queen Titania brings him to protect a sullen noble, he almost refuses—he's a warrior, not a bodyguard—until he sees Niamh. His body reacts to the golden goddess, but he can't forget how his noble parents had easily tossed him aside to protect their titles. He questions if she'll do the same if he surrenders his heart.

Summer’s warm magic glittered in the night air. Nature drank deep of it and flourished with life and growth. The delightful party playing out around Niamh McNamara didn’t interest her one bit. As a member of the light court, she should’ve enjoyed the merry festivities that Midsummer’s Eve brought on, but her sour mood wouldn’t let go of her. Then again, she’d never been like the rest of her people. Darkness constantly ached within her chest beneath her golden appearance. Before she’d been able to ignore it, but now it wasn’t so easy, especially after overhearing whispers about her from the other members of court. Hiding away had helped, but she couldn’t always stay hidden. Queen Titania had requested her presence back at court for a while, and when the queen asked, one didn’t say no. The queen held a special interest in seeing Niamh, as a female noble, commit to a worthy relationship. At Niamh’s age, she should’ve at least had one potential suitor, yet she did her best to avoid them and had been fairly successful. Niamh took another sip from her goblet. The faeries around her sang, laughed and danced, yet she could barely gather the enthusiasm to smile. How cruel life was that she had to watch their happiness while she didn’t share their feelings. There were men who seemed determined to court her. The more she dissuaded them, the more eagerly they flocked to her. A familiar male elf took her elbow to sweep her off to dance, but she brushed off his hand. "Sorry, I’m not interested in dancing at the moment." Another reason why she preferred to stay away from court these days. She hated presumptuousness and what tended to happen next. His face fell, and confusion creased his brow. The lady next to Niamh gawked at her like she was crazy before grabbing the male’s hand and waltzing away with him. The lady leaned close to him and whispered something, causing them to both break out into laughter. Niamh bristled. She didn’t want to feel like an outsider amongst her own people. A happy, albeit drunken, pixie flew by her, nearly colliding with her shoulder. The tiny being apologised in a high-pitched tinkling voice, then it was gone, darting away to join a group of pixies near the mead. Most of the pixies there had already drunk their share. Their amorous personalities, combined with the summer’s fertility magic, heated the group until their moans of pleasure chimed through the warm breeze. Others nearby reacted to the intimacy, their clothes slipping off in their fervour. Yet another sign of how nature’s power innately affected the Seelie. The group she stood with were still chatting merrily amongst themselves, though their attention was beginning to drift to the playful fledgling orgy. Niamh slipped away into the forest, making sure no one saw her. She needed a break from the laughter and shallow niceties. Her face ached from the plastic smile she wore for the party. Once safely out of view, she leaned against a tree and let out a ragged breath. Her fake smile fell, and she stared into the sky between the leaves. If only she were home, away from the misery of joy she had to force. Warmth and happiness permeated the air around her, but a part buried within her retracted from those emotions, shying away from the silky caress. Most of the time, she wondered if she had something wrong with her. Darkness held solace for her while light made her aware of what she lacked. The snap of a branch startled her, and she peeked around the tree. No one was there. Thoughts about her inner darkness dissipated. Her shoulders tensed, and she strained her ears to hear more signs of movement. Another twig snapped behind her, and she nearly jumped out of her skin. Before her stood a man in an elaborately decorated mask, which covered most of his face. A dark hood and cape cloaked the rest of him, making it impossible to distinguish any of his features. He was most definitely fae like her—he had that kind of aura. He must’ve hidden his wings beneath his grand cape. She looked him over with a frown. Why was he here, away from the party? Especially dressed as he was? I left the party behind to rest, not to give someone the opportunity to make my acquaintance in private. She sighed but forced herself to smile. A scream caught her attention from the party, turning her towards the sound, but the laughter that followed reassured her that everything was still safe. The foreboding man spun her to face him. He clasped his hands around her throat, and slammed her folded wings back against the tree. Her head bounced against the hard oak. She clawed at his glove-covered hands, trying to get him off her, trying to draw air into her lungs. He smashed her against the tree again, but his grip slipped slightly. "What do you want?" she squeaked, gulping in air. "You. That’s what I wanted." She’d never heard this man’s voice before. How could he want her while she couldn’t figure out who he was? He must’ve used glamour so she wouldn’t recognise him.
Buy Now 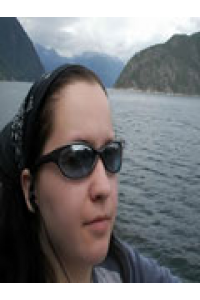 Sarah Makela loves her fiction dark, magical, and passionate. She is a paranormal romance author, but she's written all over the romance spectrum with cyberpunk, sci-fi, fantasy, urban fantasy…even a sweet contemporary romance!

A life-long paranormal fan, she still sleeps with a night light. In her spare time, she reads sexy books, watches scary movies (and Ghost Adventures), and plays computer games with her husband. When she gets the chance, she loves traveling the world too.

Share what you thought about Surrendered and earn reward points.