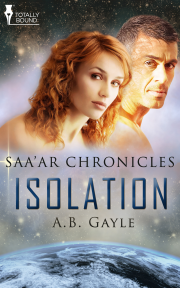 Book 1 in the Saa'ar Chronicles series

Isolated, they are vulnerable. Working together, they might just survive.

Stranded on an alien space station at the edge of the Solar System, Dr Dana Sinclair has never felt so alone in her life.

While she and her fellow travellers wait for a spaceship to take them on the rest of their journey to the aliens' home planet, first the remaining Saa'ar on board then her superior, the chief Medical Officer all die mysteriously.

The health and welfare of the remaining humans is now her responsibility. Will she discover the truth behind their deaths in time?

Ethan O'Reilly, a disabled war hero and second in charge of the mission may be able to help, but can she trust him?

Reader Advisory: This book is part of a series but can be read as a stand-alone book.

Ethan groaned and rubbed his fingers across his temples, trying to reduce the throbbing inside. What godforsaken hole am I in now?

A quick scan of his room didn’t help. Bed, desk, chair, cupboard, small bathroom. He’d spent half his life sleeping in quarters like these. Bog standard demountable army room, the same in every fuckin’ UN base on Earth.

He wasn’t on Earth.

He wasn’t even on a planet that resembled Earth. Instead, he was stranded on a freakin’ space station. The familiar surroundings always confused him.

It was the Commandant’s fault. Before all the personnel were woken from their coma-like sleep, she had inspected the section that the Saa’ar had cleared out for their use. When she’d discovered how primitive and bare it was, she’d ordered Ethan and Tinker and his small team of engineers to temporarily transform the empty void with the flatpacks and wall linings that they’d brought for their new colony. She claimed it would prevent the personnel from becoming homesick while they waited for the Saa’ar to return. From what he could gather, the ship that had brought them from Earth was just a shuttle, but their big starship was more like an ore tanker and not equipped to take ‘beings of their size’ on the inter-stellar jump, so another vessel, more suited to their needs, was coming to get them. Or, at least, that’s how she explained it.

Personally, he’d have preferred leaving the dark alien walls with their patterns and symbols uncovered. That way he wouldn’t wake up every morning and wonder where the bloody hell he was, especially after having too much to drink the night before.

Ethan groaned and rubbed his head again. Boy, although it tasted vile that Skootch sure packed a punch. Carefully, he stretched all the kinks out of his body. Reality flooded through his brain like it did every time he awoke nowadays. These standard-sized beds used to cause him grief because his legs jutted out way past the end of them. Stepping on the land mine sure fixed that. How fuckin’ ironic.

Ethan closed his eyes and idly stroked his morning woodie. Unfortunately, ever since the explosion, sex had become a distant memory. Pity, because given the chance, his cock still performed perfectly. He spat on his hand and resumed rubbing. It seemed like years since he’d been able to bury his shaft into some tight, wet pussy. Even an amateurish blow job would make a welcome break from Mrs Palm and her five daughters. He shouldn’t be griping, though. At least he still had his hands. Not being able to give himself relief would have been a fate worse than death. Though, come to think of it, maybe death would have been a better alternative. It was only when under the influence of the grog or at least lost in lustful fantasies that he managed to push the memories away.

His hand stilled for a moment as screams from the past intruded...his screams. In a way, the fact that his mates never knew the missile was coming was of some small consolation.

Taking a deep breath, he replaced that nightmarish vision with one of a room full of naked women, screaming with pleasure at the sight of him. Ah, that’s better. Now which one should I pick? The slim blonde beckoning him to join her on the satin covered bed? Judging by the pale curls covering her pussy, the colour didn’t come out of a bottle. Yep. Blondes were definitely more fun, but this one reminded him too much of his ex-wife. Fashionably thin. Tanned skin like leather. He preferred women with curves in all the right places.

Shoving that image out of his brain, Ethan replaced it with a wide-eyed brunette who was gazing up at him with adoring eyes as she sucked on his cock. He wet his hand again, trying to kid himself that the moisture was coming from her mouth. The girl gagged slightly as she tried to swallowed him all the way down, giving him an apologetic grin before going back to her task. Nah, she’s too young. He liked his women more mature. Ones that knew what they were doing.

Ethan snorted and forced the unlikely scenario away, concentrating instead on the way the woman’s breasts spilled over her slim hands. His own were itching to take their place. The speed of his rubbing increased, and all the different strands of tension that had been bugging him for weeks transformed into rivers of blood that funnelled into his cock. Boy, was he hard! Fucking someone as hot as that doggie-style woman had to be his ultimate fantasy. Maybe she was the one he’d choose. The slick wetness of his cock couldn’t wait to delve into that tight c—

An ear-piercing screech rang out, driving the images away. Damn. Ethan lifted his head and reached across to shut off the alarm.

Big mistake. The walls threatened to collapse in on him as the room spun crazily.

With a groan, he collapsed back onto his bunk, both hands pressed against the sudden pain in his stomach. Shit, Abu said I was drinking too much!

The softly voiced warning rang in his head again, ‘You’re getting a stomach ulcer, Ethan, and your liver has been compromised. If you don’t stop drinking, you won’t live to see forty.’ Except it wasn’t Ethan who had died, but Abu.

The rivers of blood halted as if they were snap frozen—in this case, chilled by memories of a more recent tragedy. All had been going well until most of the aliens headed off in the shuttle to join their starship, leaving only a few to look after them until the replacement ship arrived. Shortly afterwards, the remaining aliens started dying and nothing Abu or his team had been able to save them.

Then Abu had died.

All the MedPath personnel who had been looking after the aliens were immediately isolated in strict quarantine and the rest of the contingent had been ordered to stay in their quarters as much as possible. Now all they could do was wait until Dana Sinclair determined if Abu had caught one of the aliens’ diseases. If so, all their lives might be at risk.

Unlike many authors, A.B. hasn't been writing stories all her life. Instead she's been living life.

Her travels have taken her from the fjords of Norway to the southern tip of New Zealand. In between, she's worked in so many different towns she's lost count. She's shoveled shit in cow yards, mustered sheep, been polite to customers, and traded insults with politicians.

Now living in Sydney, Australia, A.B. finally has enough time to allow her real-life experiences to morph with her fertile imagination and create fiction that she hope her readers will enjoy.

"People fascinate me," she admits. "I enjoy writing about their relationships and the love they can find in the strangest of circumstances and places, whether they're the same sex or the more traditional pairing. I like to explore the "what if" aspect. What if there was a big differences in their ages as in "Mardi Gras" or came from different cultures as in "Caught". What if the world around them changed and they were no longer on earth as in "Isolation", or what if they were paired with a non-human like Cedric the cyborg in "Reversal" and "Initiation".

A.B. tries to weave a lighter strand through her writing. No matter how serious the subject, her heroes and heroines discover that having a sense of humor can make even the worst situations bearable.

The characters felt real and the plot was original. I learned about the technology and world in a way that was entertaining. I did not feel I was being lectured to. I did not want to stop reading, and...

I couldn't put this down once I picked it up. It was easy for me to get sucked into Dana's point of view...The story here is really about how the crew bands together to solve the mystery much...

Share what you thought about Isolation and earn reward points.

Other books in the Saa'ar Chronicles seriesView Series Page